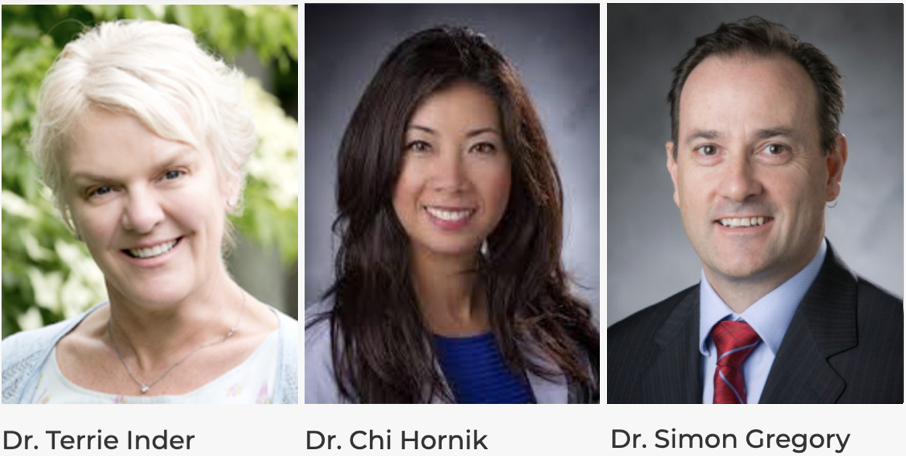 DURHAM, NORTH CAROLINA, UNITED STATES, October 5, 2020 /EINPresswire.com/ — Tellus Therapeutics, a neonatal care company developing safe and effective treatments for unmet needs of newborns in the neonatal intensive care unit (NICU), today announced the appointment of Drs. Terrie Inder and Chi Hornik to the Scientific Advisory Board (SAB). The members of Tellus’ SAB are an unparalleled group of clinicians, researchers, and academic experts on the study of the newborn brain, neurodevelopmental disabilities, and clinical interventions as well as mechanisms of brain injury and inflammation. The SAB will guide and advise on clinical development programs, focusing particularly on Tellus’ reparative treatment of diffuse white matter injury in premature infants for prevention of motor complications and other disabilities associated with cerebral palsy. Terrie and Chi join Dr. Simon Gregory advises on Tellus scientific programs, including target identification and validation, assay development, and in vivo models.

“We are thrilled to be tapping into their diverse perspectives, profound expertise, and tremendous insights in neonatal research and critical care to guide the development of our lead program TT-20 for treatment of white matter injury in premature infants,” said Eric Benner, M.D., Ph.D., chief scientific officer and co-founder of Tellus Therapeutics. “Our approach to developing treatments specifically for newborns is built on an understanding of the unique biology, disease pathology and patient population found in the NICU and has broad potential for application to unmet needs beyond neonatal brain injury.”

Terrie E. Inder, M.D., MB.cHB., Scientific Advisory Board Member, is the Chair of the Department of Pediatric Newborn Medicine at Brigham and Women’s Hospital in Boston, MA and is the Mary Ellen Avery Professor of Pediatrics in the Field of Newborn Medicine at Harvard Medical School. Terrie is a dual boarded newborn medicine physician and child neurologist with a research focus on the newborn brain. Her research is targeted at understanding the timing, mechanisms and impact of cerebral injury and altered cerebral development in the human infant. Her studies have focused on infants at high risk for brain injury including the prematurely-born infant, the sick term-born infant, and the infant with congenital heart disease. Terrie’s research aims to investigate means of accurate, early diagnosis of brain injury as well as developing treatments and preventive strategies to reduce subsequent neurodevelopmental disabilities. This research work has utilized technologies including near infrared spectroscopy, electroencephalography and magnetic resonance imaging. Finally, Terrie acts as a mentor and educating neonatologist in the neurology of the newborn.

Chi Hornik, PharmD, Scientific Advisory Board Member, is the Director of Clinical Research in the Division of Pediatric Critical Care Medicine at Duke University. She is a pharmacotherapy specialist, a practitioner in neonatal and pediatric critical care, and has faculty appointments in the Duke School of Medicine and the Duke Clinical Research Institute (DCRI). In addition to her clinical service in the NICU, Chi’s clinical research responsibilities include leading multicenter clinical trials through DCRI and serving as site PI on 7 concurrent federal and industry-funded clinical trials at Duke. She also serves as Chair of the Medication Safety Alliance, Team Lead of Maestro Care Builds and coauthor of >70 clinical guidelines in the NICU. Chi received her Doctorate degree from the University of North Carolina at Chapel Hill where she maintains a faculty appointment in clinical education. As a clinician, researcher, and mentor, she is committed to improving the health of all children.

Simon Gregory, Ph.D., Scientific Co-Founder and Scientific Advisory Board Member, is a Professor in the Department of Neurology, Duke University School of Medicine, and Research Director of the Duke Center for Research in Autoimmunity and MS at Duke University. In 2007, Simon and his collaborators identified the first multiple sclerosis (MS) gene outside of the MHC to be associated with the disease, which forms the basis of ongoing functional research whose goal is to establish the role that alternative splicing may play more broadly in the development of autoimmune disease. Simon is Principal Investigator of a ~1,000 patient multiple sclerosis cohort that is being used to identify multi-omic biomarkers to facilitate the reclassification and chart the trajectory of MS. Finally, Simon has a long-standing collaboration with Dr. Eric Benner to explore the efficacy of drug candidates in the treatment of MS.

About Tellus Therapeutics:
Founded in 2018, Tellus is a mission-driven R&D company dedicated to developing safe and effective treatments for unmet needs in newborns. One in ten babies is born premature and at significant risk for white matter (myelin) injury and subsequent life-long cognitive and neurological impairments, such as cerebral palsy. Tellus is developing novel small molecules derived from human maternal breast milk demonstrated to induce regeneration of myelin-producing oligodendrocytes, reverse white matter injury in animal models of perinatal brain injury and is pursuing a First-in-Neonate regulatory path to evaluate safety and efficacy in newborns with brain injury for whom no treatments are available.